Pasquale Fedele is a computer science engineer and serial entrepreneur, founder and CEO/CTO of multiple companies focusing on life science and enterprise solutions based on Artificial Intelligence and Human-Machine interfaces. Inventor of BrainControl, a medical device that gives people the power to control assistive technologies with their thoughts (BCI). The product received many international awards thanks to BrainControl. He was CEO and CTO.

In 2017 he received the award Knight Order of Merit of the Italian Republic.

He received a MBA in December 2004 and a Master’s Degree in Computer Science in July 2001, both from the University of Siena.

He has worked as research associate at the University of Siena on several national and international research projects and as contract professor on “Object-oriented design” and “Telematic networks management”.

Artificial Intelligence advances are leading to exciting outcomes in the design of intelligent agents, including robots, digital humans, virtual agents and smart devices.
At the same time, AI is opening up a wide perspective in the human-machine interaction field and, particularly, how to combine artificial intelligence and user experience design.
The talk will focus on human interactions with agent systems, through examples from healthcare, industrial and cultural experiences, based on technologies such as brain-computer interfaces, conversational AI, computer-mediated communication and remote control.

Video of the talk on Vimeo. 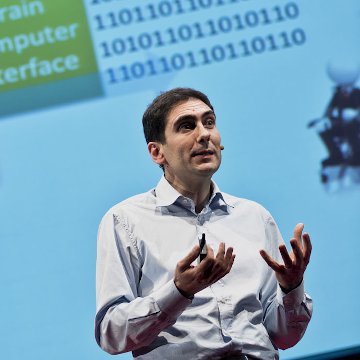 Know What You Will Learn